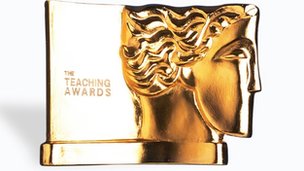 There were 24,000 nominations for teaching awards

A teacher who has brought Japanese to the West Country is one of the winners of this year’s teachers’ awards.

The so-called “teachers’ Oscar” for secondary teacher of the year has been won by Crispin Chambers of Tavistock College, a comprehensive in Devon.

The languages teacher was praised for his inspirational lessons, high results and for building links with Japan.

His local mayor says the town should erect a statue to him in recognition of his achievements as a teacher.

There are 1,200 pupils studying Japanese at the secondary school, from Year 7 to A-level, which makes it one of the biggest Japanese departments in the country.

The school has an annual exchange visit to Tokyo and the Japanese embassy has described Mr Chambers as a “trailblazer” for promoting the language.

Mr Chambers says that when the idea of teaching Japanese was launched in the 1990s, no-one expected it to work.

Languages such as Japanese and Chinese were seen as something more likely to be taught to the most able pupils in independent schools.

He says that the challenge has been to make it accessible to all ability groups – and now there are about 50 to 60 people taking the subject at GCSE each year, with outstanding grades.

As well sending students to study Japanese at university, Mr Chambers says that speaking Japanese is a huge advantage in the jobs market, in areas such as banking, medicine or law.

There have been many warnings about the UK’s poor level of language skills, but Mr Chambers says that it is possible to “capture the imagination” with languages and to show students there is a real value to learning a language.

Mr Chambers’s first experience of teaching was in Japan and he says he was captivated by the respect shown to teachers and that it was seen as a “pleasure to study”.

“Parents would thank you in the street for teaching their children,” he says.

The role of teaching in the UK also needs to be recognised for its importance, he says.

“One teacher can be the dominant feature in someone’s life,” he says.

There were 24,000 nominations for this year’s Pearson Teaching Awards, which were launched in 1998 to celebrate the achievements of the teaching profession.

This year’s ceremony at the Theatre Royal, Drury Lane in London saw 10 prizes being awarded.

Among the famous names handing over prizes was Mo Farah, who has acknowledged the important role PE teacher Alan Watkinson played in developing his athletics career.

The winners of the 2013 Pearson Teaching Awards are:

The awards ceremony will be shown on BBC Two on Sunday, 27 October at 17:30 in Britain’s Classroom Heroes