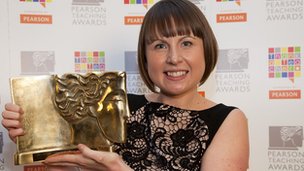 The winner of one of this year’s top prizes in the annual teaching awards chose a career in the classroom rather than in university.

Liz Bailey, with a PhD in English, has won the prize for Outstanding New Teacher of the Year.

Teaching in an Essex comprehensive, she is an example of the high-flying intake of graduates entering teaching.

“We were bowled over by this teacher,” said the Teaching Awards judges, who praised her “exceptional talent”.

“She is super-intelligent, but she is emotionally intelligent too. She is already a leader beyond her own classroom and she will go far,” said the judges of this year’s teaching awards – known as the “teachers’ Oscars”.

‘More than a lesson’

Dr Bailey began as a trainee at Clacton County High School in 2010 – and became head of department in her second year.

She trained in school, rather than through a PGCE course, and said she immediately liked being in such a “dynamic environment”.

This direct, hands-on training, and working in real-life schools, was “invaluable”, she said, after spending so long in university.

The idea of teaching in school, rather than researching in university, made her feel that she was making a “tangible difference”.

The idea of top graduates entering teaching is a good one, she believes. But she says there needs to be a clearer path for such graduates wanting to enter teaching. At present, she says there is a “disconnect”.

She was nominated for the award by a former pupil, Anna Page, who is now studying English at Cambridge.

“English literature is more than just a lesson for me, it’s a passion, and it’s thanks to my teacher Miss Bailey,” she said.

Research into successful education systems around the world has highlighted the importance of high-quality teaching and the impact of recruiting teachers from among the most able graduates.

Organisations such as Teach First have promoted this message.

More than 20,000 nominations were received for this year’s awards, with the winners announced at a ceremony in London hosted by Clare Balding.

A recording of the event will be shown next Sunday on BBC Two.

The winner of the Teacher of the Year award was Nathan Kemp, who was praised for his work in raising the attainment and ambitions of pupils in Tollgate primary school in Newham, east London.

The Headteacher of the Year prize was awarded to Anne Bull from Weston All Saints Church of England Primary School in Weston, Bath, Somerset.

The new category – Pearson Award for FE Lecturer of the Year – was won by Irene Megaw, from South Eastern Regional College in Newtownards in Northern Ireland.

Education was a second career for her, after having worked in banking, she was praised for her work at “reaching the most disadvantaged young people”.

Another new prize, the Pearson Award for Outstanding Use of Technology in Education, was won by Ben Tipton from Sacred Heart RC Primary School in Westhoughton, Bolton.

The awards will be broadcast on BBC Two, Sunday 28 October.