Viewpoint: Can the Mo Farah effect help Somalis and Somalia?

By Idil OsmanSomali journalist in the UK 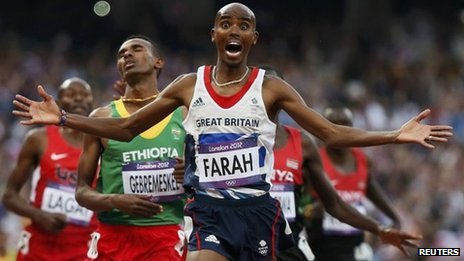 Somalia has not had a functioning government for more than two decades. Since the collapse of the state in 1991, the country has become a haven for pirates and al-Qaeda affiliated militants, who have seized the attention of the world.

The Somali community in the UK as well as other Western countries has become linked to these scourges, so it comes as a breath of fresh air to have a Somali-born Brit bring such joy to many British households who might have previously had other opinions about Somali people.

I am particularly hopeful that the “Mo Farah effect” can bring Somalis and the different communities here in Britain closer together, to truly appreciate the human aspirations and commonalities we share as part of this melting pot known as Great Britain. 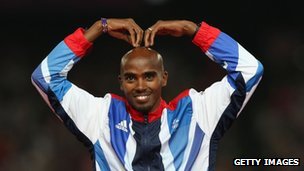 I was in the Somali capital, Mogadishu, for the past two weeks so I unfortunately missed the chance of catching any of the Games live, but I made sure I watched on every TV at my disposal and I wasn’t the only one.

At every big screen one couldn’t escape from the roaring crowd, all vying to see Mo in action.

People adore him in Mogadishu, and rightly so.

It is his birthplace and most of the local youngsters feel that sense of connection with him.

The Somali youth… often grapple with finding a balance between their Western upbringing, Somali roots and Muslim faith ”

While mingling with local people, I noticed the amazing ability of one person to be able to transcend disparities and bring together people who had been separated and turned against each other by power, greed and clan animosity, despite being many miles away.

Mogadishu is a city divided by tumultuous conflict, with most people separated by their political or religious views, but for the brief moments that Mo was on TV, everyone came together, united as Somalis.

And the same was true of Somali-inhabited territories elsewhere in East Africa.

On my way to the UK, I had the chance to make a pit-stop in Kenya’s capital, Nairobi, where I visited Eastleigh – a densely populated neighbourhood where nearly all residents are ethnic Somalis.

Somalis were overwhelmed with joy and Mo reciprocated their support by expressing his sense of appreciation for all Somalis, irrespective of where in Somalia they came from or which clan they belonged to.

This, I think, has further lifted the reverence the Somali people had for him.

He chose to appreciate the bigger picture in a deeply divided society and as a result has perhaps created a sense of unity that has long been missing in the Somali community.

Additionally, he has remained true to his religious beliefs, giving a Muslim prayer after each win and thanking Allah for his victory.

This will no doubt restore confidence in the Somali youth, who often grapple with finding a balance between their Western upbringing, Somali roots and Muslim faith.

I am optimistic that his win will shed light on a different kind of role model Somalis can look up to and aspire to emulate, and maybe we might be lucky enough to see more Somali-British youngsters competing in the next Olympics. 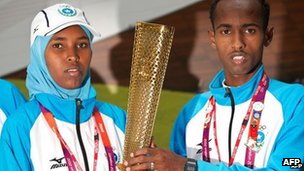 Somalia’s Olympians said they were inspired by Mo Farah

He is already an inspiration to Somali Olympians Zamzam Mohamed Farah and Mohamed Hassan Mohamed, who competed in the London Olympics representing Somalia.

They both cited Mo, saying they have tried to emulate him since they caught sight of him in the last Olympics in China.

Mo’s display of his faith portrays to the rest of Britain that Somalis can remain true to their beliefs while fully integrating with the wider society, which will hopefully counter-balance the common association of Muslims with fundamentalism.

It is precisely for these reasons that I think Mo will remain dearly cherished by all Somalis both inside the country and in the diaspora and I hope his effect will stretch wide enough for all of them to unite once again.