Wandsworth’s community has come together to remember “Mr Tooting” – a former headteacher described simply as “outstanding” by friends, colleagues, religious leaders and MPs across the UK.

Syed Nawazish Bokhari, who helped generations of youngsters succeed at school while turning around the fortunes of Ernest Bevin College during a 17-year spell in charge, died on March 1 aged 73.

Mr Bokhari – known to many as Naz – became the first Muslim headteacher of a British secondary school when he took over at the Beechcroft Road school in April, 1985.

A founding member of the Muslim Teacher’s Association, he went on to receive an OBE for services to education in 2001, and was later awarded the Honorary Fellowship of the College of Teachers.

According to his son Harris, Mr Bokhari’s funeral at the Balham Mosque, on March 2, saw more than 40 non-Muslims pay their respects – uncommon in Muslim culture.

Harris, who said his father
“embodied the spirit of Tooting”, told this newspaper: “That’s the gravity and the love he had across all faiths. If you speak to anyone who knew him they would always say they were treated as his best friend – he had that uniqueness even to the last days of his life.”

Daughter Hina, who admitted being “shocked” after realising the impact her father had on the lives of others, said: “Dad was somebody who mixed with anybody – any culture, any background, any age.

“He was someone who crossed all faiths and cultures, that’s why ‘Mr Tooting’ works so well. He embodies the multicultural aspects of Tooting and the way different communities come together. My brother and I knew he had lots of friends and got on with everybody – that’s his legacy to us. We will always strive to carry on in his good name.” She added: “My daughter was born seven weeks ago. He knew that she was going to be born and it was almost like he was fighting to stay alive for her. He managed to see his granddaughter and the first thing he said was ‘mashallah’, which means thanks to Allah. All of us have been so blessed that he managed to see Marya.”

A former pupil and Tooting MP, Sadiq Khan, said: “Syed ‘Naz’ Bokhari was an outstanding teacher and role model to thousands of schoolchildren, including myself.

“As the headteacher of my old school, Ernest Bevin College, he encouraged generations of students to aspire to go to university but also to put something back into society. He turned the school around to make it one of the most improved in Britain – GCSE candidates’ A – C grades rose from 18 per cent to 60 per cent under his guidance, and A-level results had a pass rate of 95 per cent. His final Ofsted report paid tribute to his qualities of leadership. He broke glass ceilings, becoming the first Muslim deputy head, and then headteacher, of a British secondary school – but always saw himself as a teacher who was also a Muslim, rather than a ‘Muslim teacher’. He was proud of his former ‘Bevin Boys’ and kept in touch throughout my legal and political career. I like to think that my own achievements would have been limited were I not instilled with the drive and respect that I learned first-hand from such an amazing, yet humble gentleman. I last saw him a couple of weeks ago in hospital, although obviously weak, he was still extremely warm and friendly, and spent a long time asking me how I was doing, how I was enjoying my job and how my family was. It says a lot about what kind of a man he was – instead of focusing on his own illness, he was taking an interest in others. Over the last few years he would regularly phone me after a big case or when I had been in the news. He was always willing to make suggestions and give me encouragement. He was a lovely man.”

“Naz Bokhari was a truly unique individual who dedicated his life to education and to helping young people achieve their greatest potential. He was a modest, loyal and humble servant of education in the borough yet he had a steely determination to improve the lives of others. Although quiet and thoughtful he had the knack of getting things done, mobilising the commitment of others and getting to the heart of the matter. It was only right that he achieved national recognition through the honours system for all his invaluable community work. He will be remembered best for being a tireless campaigner for schools and in particular boys’ education. Thousands are grateful to Naz for their educational achievement. He was both respected and popular with pupils, parents, staff, his headteacher colleagues and the whole community.”

“Mr Bokhari was an outstanding community leader and had a long association with Wandsworth police. He was chair of the Independent Advisory Group, a ‘critical friend’ to review police operations and support the police response to any critical incident, one where the confidence of the community in the police may have been damaged. As such his experience and knowledge of the community was invaluable to the police in making difficult policing decisions. He was always prepared to give his honest view, but always in a sensitive and constructive manner, which made the working relationship always a pleasure. Wandsworth police will very much miss his valuable contribution.”

In recent months, political figureheads up and down the country – including Tony Blair and Alex Salmond – have written letters praising Mr Bokhari’s work.

A memorial is being planned for later this year. 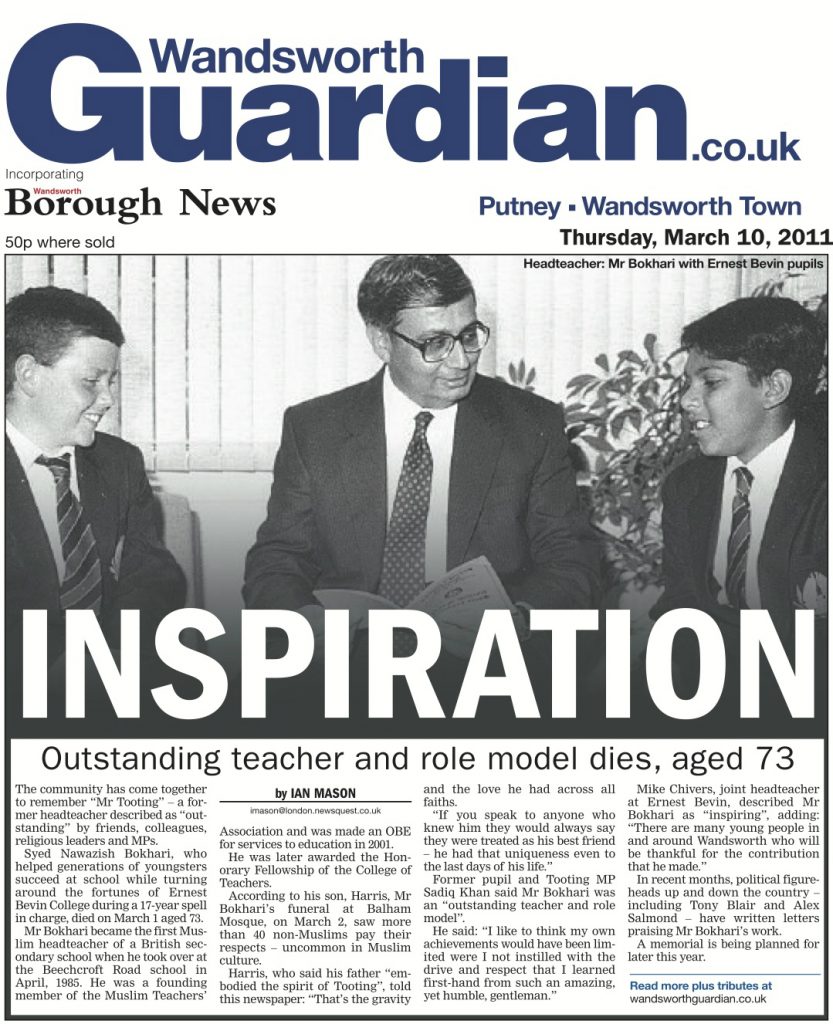 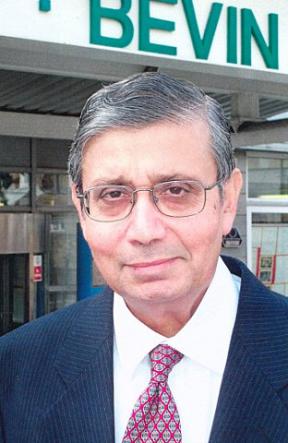 Read more about the impact and legacy of Naz’s life and work.
Read more

Find out where we started and how we have progressed.
Read more