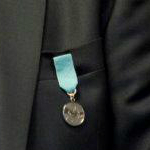 The Foundation organised the PRF Mosque Medal Ceremony at the House of Commons.

The News: Role of mosques in Pak flood recovery praised

‘The floods absolutely devastated countless families in Pakistan, but despite the dire economic times, this amazing initiative has raised significant sums for people in real need. Lives cannot be brought back, but the Fund has delivered support and hope. I want to relay my thanks and congratulations both to the organisers, and the Fund’s supporters in Mosques up and down the country, without whose help, this would not have been possible.– Zac Goldsmith MP

‘The Pakistan Recovery Fund is a fantastic initiative led by HRH the Prince of Wales to support the people of Pakistan after the greatest natural disaster to have ever hit their country.’– Anas Sarwar MP

‘The Pakistani people are dealing with a major humanitarian crisis in the wake of the 2010 floods, and it is truly commendable that individuals in Brighton and across the country have been able to offer a contribution to the relief effort even in these difficult economic times.’– Caroline Lucas MP

Yesterday, the Pakistan Recovery Fund (PRF) celebrated the Mosque Campaign, setup by the Muslim Directory, with an event at the House of Commons.

Sir Iqbal Sacranie OBE spoke passionately about the need for all local communities to come together to support Pakistan. He commended HRH The Prince of Wales for addressing public concerns around transparency, and corruption by setting up a credible and secure conduit for fundraising. John O’Brien, Special Representative to HRH, added to this sentiment by echoing his own personal concern for the flood victims in Pakistan. He explained that the Fund will seek to help rebuild lives, homes and enterprise in the Sindh region.

The Fund would like to thank the Muslim Directory, the Mosques, every MP and the team that made this event possible.To date the Mosque Campaign has donated more than £16,000 and the PRF is hoping to engage with other mosques over the Ramadaan period.If you are interested in participating in this nationwide campaign please contact the Fund at [email protected]

The Pakistan Recovery Fund is a charitable initiative convened at the behest of its patron, HRH The Prince of Wales. The Fund seeks to raise money for flood-affected victims in Pakistan. 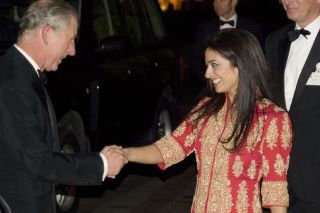 On Wednesday 7th March 2012, the Naz Legacy Foundation will be officially launched by HRH Princess Badiya bint El Hassan of Jordan at Ernest Bevin College, the school which Naz Bokhari OBE become the first Muslim to be headmaster of a secondary school.

The launch will announce the charities that will be supported by the Foundation and details about the Naz Bokhari Award and a portrait of Naz Bokhari OBE, which will be displayed in the college. 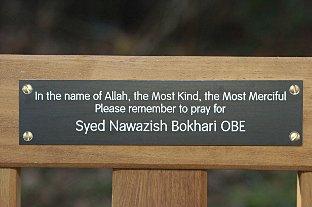 The Foundation is proud to announce that the commemorative bench has been unveiled in Morden cemetery, the final resting please of the late Naz Bokhari OBE.  The Foundation would like to thank Naz’s former pupil Osman Deen who took the pictures for Wandsworth Guardian and his words of support.

A bench dedicated to the memory of Ernest Bevin College’s inspirational former headteacher Naz Bokhari has been unveiled at Morden Cemetery.

Mr Bokhari, known as Mr Tooting because of his dedication to the town, died last year on March 1 aged 73.

The former headmaster helped generations of youngsters succeed at Ernest Bevin and was credited with turning around the fortunes of the school during a 17-year spell in charge starting in1985.

Speaking on Saturday while unveiling the bench, daughter Hina said:

“Our father always said it was not what you do in your life time that really matters, it is the legacy you leave to benefit the generations which will follow. “We are looking to launch an annual award – The Naz Bokhari Award.  An award for students who achieve university acceptance despite adversity, who had to strive harder than others due to personal or social issues – this will be the most important way to remember our father.”

“Mr Bokhari maintained a high standard of self value amongst us, I remember how, when he introduced the school council, the impact it created – it offered both staff and students an opportunity to air ideas.  He and staff at Ernest Bevin were very professional and inspired a lot of ex-students to pursue their goals and achieve them.”

A founding member of the Muslim Teacher’s Association, Mr Bokhari went on to receive an OBE for services to education in 2001, and was later awarded an honorary fellowship of the College of Teachers.

A memorial for him will be held in March 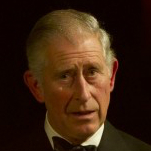 The Naz Legacy Foundation has received a silver medal commissioned by the HRH Prince of Wales’ latest charitable initiative – The Pakistan Recovery Fund (PRF).   The limited editions made from one of The Queen’s medal makers are designed to recognise support to the Fund and also act as a public testament to the contributions made by individuals and organisations.  The Foundation helped raise over £170k excluding gift aid in less than two months.

‘our father lived most of his life in the UK, however he never forgot about his roots back home in Pakistan.  He was a strong supporter of HRH initiatives and we felt compiled to help the PRF when approached by our late father’s former pupil Rt Hon Sadiq Khan to support this much needed cause for the flood victims of Pakistan.’

HRH The Prince of Wales’ concern for the situation in Pakistan moved him to make a personal donation in the immediate aftermath of the floods. Subsequently he set up the Pakistan Recovery Fund, a time-bound initiative dedicated to raising between £2-5milliion for flood victims.

In his speech at the gala dinner HRH The Prince of Wales’ re-iterated both his personal affinity with Pakistan and the pressing need to address the humanitarian challenges the country is facing. His reaction to the damage caused by the floods was to ‘turn to [his] charities to see what practical support they could offer…and several groups answered this call straight away.’  The people of Pakistan ‘need our help and we must not be silent in their time need.’  He spoke about the need to ‘draw the spotlight’ back onto the victims of the Pakistani floods. With the Fund we ‘have the opportunity to rebuild towns and villages and infrastructure, not to mention livelihoods and health.  HRH explained that fund places the ‘highest possible priority on transparency, quality control and delivery on the ground.’  HRH expressed his heartfelt thanks to everyone in joining him to support the cause.

The Pakistan Recovery Fund has been convened by the British Asian Trust, one of HRH The Prince of Wales’ charities. The British Asian Trust will work alongside partner organisations and local delivery partners to ensure transparency and accountability. They will employ a robust due diligence process, which will allow funds to be channeled to effective local delivery partners operating in the Punjab and Sindh regions. The Pakistan Recovery Fund aims to provide support in four key areas: homes, education, health and livelihoods. Without basic shelter, protection from common disease and an opportunity to learn and develop, Pakistan will struggle to rebuild itself.

HRH The Prince of Wales speaking about Pakistan and the PRF On the 17th May 2011, Naz Bokhari OBE joined an elite group of world-renowned educators when he became the first Muslim to be awarded an Honorary Fellowship from The College of Teachers. This award is conferred upon individuals who have made a significant contribution to education nationally or internationally.

His daughter Hina, who received the award on behalf of her late father said ‘we are all very proud of our father’s achievements.  He had to overcome many obstacles to become first Muslim headmaster.  His dedicated service to education is a hallmark of a man who was an epitome of a public servant.’

The President of the College of Teachers, Raphael Wilkins, commented as follows. ‘The College has awarded Naz Bokhari the Honorary Fellowship in recognition of his broad contribution to education, especially through his leadership of Ernest Bevin College and his contributions to institutional governance including as a member of GTCE and of the College’s own Council, where his experience and commitment were greatly appreciated.’

His local MP, Rt Hon Chris Graylings, commented as follows:  “Naz Bokhari was a real pathfinder in education in this country, who set an example for many many others to achieve in our schools.”